It happens very seldom that I'm asked to do healing on an animal, but here is my first dog healing story.
In November 2012 a friends big dog got suddenly very sick and brought it too the vet. The vet found out that the dog had devoured a big rubber dog toy, which was made of toxic material. The vet immediatly operated on the dog's stomach. Unfortunately the toy pieces were already in the dog's intestines. Unable to operate on his intestines the dog had to dispose of the toy in the natural way, or it would die. 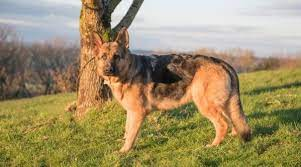 This process had to be supported by a special diet as his stomach and intestines were totally inflamed, raw and painful. The next 24 hrs were crucial to see if the dog would make it through the night. Thank God it did!!!

During the next week the dogs bowel movement had sort of returned to normal but still non of the toy's pieces had come out. The dog was dramatically losing weight, because the poison was spreading through his body. Then my friend rang me and asked if I could do a healing on the dog. I said I can at least try.
I once had done a short healing on a friends baby. (I'm not comparing a baby with a dog!) But the baby also had digestive problems. Approximately 15 min after the 10 min session, the baby let it all go!!! After that she fell asleep happily and exhausted from all that releasing and slept for almost 4 hrs!
I did a 2x20 min session on the dog. My friend rang me the next morning with the happy news telling me that the shredded toy had come out! Then a few days later she rang me with the news that the dog had gained already 2 pounds of weight! Such great news for the dog, its owner and myself too, as this is the first time I have done a healing session on an animal! And straight away it had a positive outcome!

We must of course foremost thank the vet as she has done a great job on operating the dog and choosing the right diet and following up treatment for the dog!!! And not to forget my friends devoted care of the beloved dog during it's healing process.
I want to also hereby thank my friend who has given me the trust and opportunity to work on the dog! And my spirit guides off course for their guidance! NOV 2012
Posted by ViaPina at 05:53