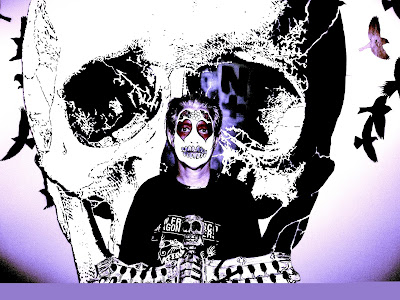 I’m standing in a kind of church, there are many people around. Suddenly two Amazonian rain forest women are standing in front of me. Their bodies are painted white. Their faces are also painted white in the tradition of Las Dias De Las Muertos (Day of the Dead), but decorated with colourful flowers petals. Whilst they’re smiling so gently to me with their peaceful eyes, I recognise them as Ma and Johanna. After I've recognised them they run away hand in hand. Nobody else saw them, nor did they show themselves to anyone else. I wasn't to sad as their hello and goodbye had filled me with a warm and loving feeling. They'd shown me that they were together again and free of pain…

I dreamed this 6 nights before my sister Johanna past away. I was with her when she did.
I felt our mother the night before my sister died in the hospital room,
letting me know that she came to collect her soon.

On the day I die, when I'm being

carried away toward the grave, don't weep.

Death has nothing to do with going away.


The sun sets and the moon sets,

but they have not gone.

Death is a coming together.

but it's really release


The human seed goes down in the ground

like a bucket into the well where Joseph is.

It grows and comes up full

with a shout of joy there.

Email ThisBlogThis!Share to TwitterShare to FacebookShare to Pinterest
Labels: 43 odes, back into union, coleman barks, day of the dead, death is a release, dream time, my mother, my sister, on the day I die, poem, rumi

Emptiness is a name for nothingness.
A name for ungraspability.

A name for mountains, rivers, the whole earth.
It is also called the real form.

In the green of the pines.
The twist of the brambles.

There is no going or coming:
In the red of the flowers.

And the white of the snow.
There is no birth and no death.

The feathery snowflakes fell to earth
Throughout the Winter night,
And by the following morning
The countryside was white.
A quiet beauty filled the air
Across the country land
But then the wind began to blow;
Snow drifted like the sand.
The winds created snow drifts high
In various designs.
Huge snowdrifts, snowdrifts everywhere,
But just one of a kind,
The downy flakes that fell from Heaven
Brought with them delight...
A terra firma coverlet
And snowdrifts, sculpture-like.